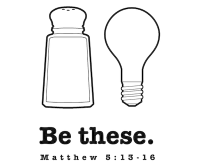 It was a mean and shameless practical joke.  A group of us had made it a tradition to spend quality celebration time in the East Point, GA Waffle House at 3 am one night in the middle of each final exam week.  I ordered a regular coffee and made the GIANT mistake of excusing myself to the restroom while waiting for my scattered, smothered & covered to arrive.  Upon returning, I dumped in cream & 3 teaspoons of sugar.  I took a large gulp of the java.  The jolt I got was not from the caffeine but rather from the sensation of having ingested ocean water.  My “friends” had emptied the salt shaker into the sugar canister, and I had unknowingly fallen for their deception.  I felt like someone had turned my head inside-out.

NaCl.  Sodium Chloride.  I have a vague recollection of this from high school Chemistry…NOT one of my better subjects.  But I do remember a couple of things.  It’s one of the most stable compounds in the world.   (Am I also remembering that one of them has a +2 charge & the other a -2 charge??  Seems like that’s in a file back there somewhere!)  This fact is interesting in light of how dangerous they can be separately.  Sodium alone can become supercharged with heat & burst into flames.  Chlorine at best is a great irritant & at worst can kill.  But together, they become a household item, a necessary seasoning and a powerful preservative.

In Matthew 5 as Jesus begins the Sermon on the Mount, He tells His Disciples that they are the salt of the earth.  Not that they could be, might be, ought to me, but ARE.  I think if I was one of those Jewish guys, sitting there listening, who hadn’t quite made-up-my-mind-who-this-guy-was-yet, my brain would have wandered back to Genesis 19.  The story of Lot & his family fleeing Sodom would have been a story told to me as a young boy, and memorized along with the rest of the Torah soon afterward.

This story was recently brought to life by History Channel’s “The Bible” miniseries which aired in the weeks leading up to Easter.  By the way, kudos to the producers of this who remained remarkably close to the Biblical story line.  I would say, however, that they missed the depth of depravity to which the “household of Lot” had sunk.  One of the most horrifying aspects of the whole story was that Lot offered his virgin daughters to the horde of angry homosexual men outside his door who were ready to gang rape Lot’s 2 angelic male visitors.  What the heck!!?? The preface to this narrative is Abraham’s conversation with God, “bargaining” for the city.  Would God destroy the city if 50 righteous people could be found?  40?  30?  10?  If just 10 righteous could be found, God would spare it.  Let’s suppose Lot & the immediate family were righteous…they only needed 6 more!  What’s going on here?

If I was one of those disciples, I would have remembered that there was an instruction to not look back.  Lot’s wife did, and something very interesting happens.  God could have turned her to stone.  I suppose she could have turned into chocolate, or melted down like the Wicked Witch of the West; but no…she turns into a pillar of salt.  God turns her into the very thing she was supposed to have been in her culture!  I just wonder if Mr. & Mrs. Lot had been salt of the earth, glorifying God in small ways in their daily lives, if there would not have been even 3 other men and 3 other ladies who would have been drawn to faith in Yahweh.  (Shameless plug:  they would have been saved if they have been leading a Small Group!)

If we are His disciples, then we are the salt of the earth as well.  The power of being salt is not going on overseas mission trips or leading convention-sized Christian rallies.  Much of being salt is accomplished in the ordinariness of life.

I love this quote from Donald McCullough’s book Say Please, Say Thank You:  The Respect We Owe One Another:

I’m more interested in the little things, such as remembering to say “thank you” and to call your mom on Mother’s Day.  These things may not seem very important when compared to the major problems facing our culture.  Yet they may be the best place to begin; they may be the only honest place to begin.  If a person can’t remember to say thank you to her housekeeper, it probably won’t matter much is she writes a major philosophical treatise on kindness; if a person is rude to his family, the angels probably won’t give a holy rip if he preaches soaring sermons on the nature of love.

This week at our church (Spring Road Christian Church) we begin a new series called “Kingdom Revisited.”  In particular, this week focuses upon Jesus’ statement to us as His disciples that we are “salt & light” in the world.  For further personal or group study on this Sunday’s sermon & text, click Group Study 4.7.13 to download this week’s Renew Group Discussion Questions.

What kind of seasoning or preservative is your soul being in the community around you?  Is the energy radiating from you breathing life or death to those around you?  For a little added bonus on how Spiritual Formation teachers are explaining a Well Ordered Soul who is “salt & light” in the world, you may be interested in this video: